Christian performs since 1983 throughout Europe in jazz clubs and at festivals, mainly with his own trio (and guest soloists) and his quartets. Between 1989 and 1994 he co-led the jazz group Questar with flutist/saxophonist Andreas Spannagel.

Since July 2016 Chistian organizes/performs every other month in the new concert-series BOH-Jazz in Bocholt, and in October 2017 Christian started doing concerts in the Kulturbunker Cologne, entitled Cool Kubus.

The sound of this special quartet is driven by the powerful Hammond B3 organ, which delivers bass lines and shimmering chords in combination with the soulful sounds of the electric guitar. This classical mix of instruments is complemented by the eruptive qualities of both tenor sax and drums.

The quartet, which is oriented towards the energetically higher levels of contemporary jazz, plays its own pieces mixed with modern jazz standards in the tradition of bands by organist Larry Young or trumpet player Woody Shaw.

Listen to music of this band:

This is a raw-mixed 2-track demo recorded at Clemens Orth's studio in May 2017. CD recordings are planned in the near future.

Concert review of the quartet: 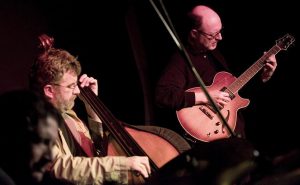 The music of the Christian Hassenstein Trio is naturally geared toward Christian's guitar playing. His improvisational talents and instrumental wizardry are featured and determine the sound of the trio.

Christian finds himself at ease in the trio setting, since he is able to express himself utilizing chords and single lines, making maximal use of the possibilities of the guitar. Playing trio is a demanding task, but Christian's 25+ years of experience as a Jazz guitarist enable him to succeed beautifully. See also what others found of Christian's playing here.

Within this framework the other two members join along resulting in three voices interacting with each other. In addition to originals, the trio plays modern Jazz based on the standard latin and swing repertoire.

But they don't just replicate what has been played before: in due respect to the rich Jazz tradition, their vocabulary is constantly being re-shaped, re-defined and expanded in search of making a profound and individual statement. In their playing, the creative process--may that be in improvisation or ensemble-interplay--is of highest importance.

The trio has played many concerts and has build a great rapport. Sometimes they feature a seasoned soloist as guest star, i.e., Ack van Rooyen, Toon Roos or Jasper Blom.

A video clip with a performance of the trio:

Besides Christian, the current members of the trio are: 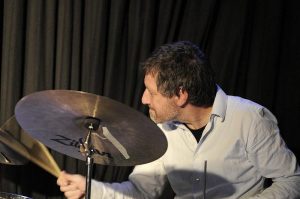 Franc (born 1961) studied drums at the Den Haag Conservatory. He graduated at the Rotterdam Conservatory with a.o. Peter Ypma and Bruno Castellucci and studied in New York at the Drummers Collective and at Manhattan School of Music (with a.o. Marvin ´Smitty´ Smith and John Riley). He played with Karel Boehlee, Lilian Vieira, Benjamin Herman and Rick Margitza and performs with his own bands The Extensionicers and Sambacá. Franc teaches groups and individuals since 1992, also at DJAM, his own drumschool Drummers Initiative and the Amsterdam and Groningen Conservatories.

Christian and David met in 2007. They struck the same chord and made plans to collaborate. David notes: “Christian is a world class jazz guitarist. A very lyrical, warm and heartfelt sound with no hint of pretension... a very gifted artist!”
In early 2008 both musicians met again for a tour of Germany with Dutch drummer Joost Lijbaart. The result was Conversations, released October 2009 on the label NRW Records. This CD received glowing reviews and was presented on successfull tours in Germany in fall 2009 and spring 2010. In 2010 they recorded a second album, Textures. This was released in 2014, also presented on tours and receiving good reviews.

In 2011 Christian and David did a tour with master drummer Bill Elgart, subbing for Joost. 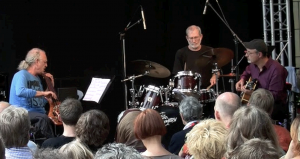 This trio covers a broad spectrum of influences, ranging from Jazz to world music, adding collective improvisation at times. They enjoy a unique synergy.
The pieces include soft latin grooves or swing furiously, are built around complex harmonies or modal simplicity. In some passages David just taps on his bass, while Christian dampens his strings and plucks in counter rhythm, and Joost rattles a bell tree to complement. The occasional bass or guitar solo rounds up their performances. “It’s all about creating an intense listening experience for the audience,” Christian says.

The opinion of the press: 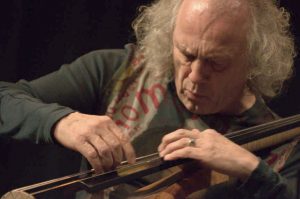 Born 1942 in Tacoma/Washington, USA. Started out as a guitarist and switched to bass in 1964. Considered today as one of the world’s greatest bassists.
Played and recorded with (amongst others): Michael Brecker, Steve Gadd, Joe Henderson, Stan Getz, Marian McPartland, Sam Rivers, Dexter Gordon, Mal Waldron, John Scofield. Recorded over 65 CDs under his name, four of which received a 5-star rating in DownBeat magazine.
Teaches currently as a Jamey Aebersold clinician, and holds workshops at conservatories all over the world.

Born 1965 in Amsterdam. Studied drums at Hilversum Conservatory (NL) with Cees Kranenburg and Marcel Serierse (diploma 1991). One of the few top drummers in Holland.
Played and recorded with (amongst others): Yuri Honing, Ben Herman, Eric Vloeimans, Frank Moebus, Frank Wingold, Michiel Borstlap, Wolfert Brederode. Has recorded many CDs, also as a band leader. Toured all over the world.

Christian and Sven know each other since the early 1980s while studying at Musikhochschule Graz/Austria. Sven is a sharp listener, a fine soloist and time-keeper. Around this time they got acquainted with US-drummer Bill Elgart, who lived in Salzburg then. Bill has a unorthodox and highly individual playing style, always grooving and encouraging interplay. In 2011 Christian did a memorable tour with Bill and David Friesen as a trio. In 2012 Sven and Christian were joined by Bill for a tour and a CD-recording. The resulting album Cause and Consequence (DJAMtones DT1012) will be released in summer 2017.

The trio will perform original music mainly, spiced with some favorite standard tunes. Their style covers a broad spectrum of influences, adding collective improvisation and stretching out. Since communication is an essential ingredient to their music, they enjoy a unique synergy.

Born 1965 in Wolfsburg, Germany. Studied double bass with Wayne Darling at the University in Graz, Austria and at the conservatory in Hilversum (diploma 1991). Lives in Amsterdam.
Sven is a highly in demand bass player in the Dutch jazz scene. He also is a skilled arranger/composer and leads his own Amstel Bigband in Amsterdam. He has been performing and recording CDs with Mike del Ferro, John Engels, Han Bennink, Ricky Margitza, Jim Hall, Harry Sokal, Wolfgang Muthspiel, Wolfgang Haffner and Mel Lewis as well as touring throughout Europe, Africa, Jamaica and the USA. Sven released numerous CDs as a leader with his bigband and quartet Shooster.

Born 1942 in Cambridge/Massachusetts, USA. Studied at Berklee College of Music with Alan Dawson and has since then become a established master drummer himself.
Played and recorded with (amongst others): Dave Holland, Lee Konitz, Tomasz Stanko, Eddie Gomez, John Gilmore, Sheila Jordan, David Friedman, Kenny Wheeler, Paul Bley, Gary Peacock. Recorded over 80 CDs as a leader or sideman.
Teaches currently at the Würzburg Conservatory and holds workshops and clinics all over Europe. 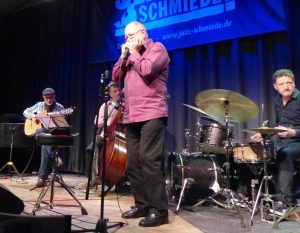 Jan Verwey is called the "Dutch Toots Thielemans" who mastered the chromatic harmonica, a instrument rarely played in Jazz. "I admire in Jan's playing it's strong emotional content in particular. His feeling refers to Bill Evans, the pianist who has also influenced me greatly and informed our common musical base", describes Christian the improvisational strength of Jan Verwey, who has extensive playing experience by working with many bands and orchestras.

Christian and Jan met for the first time in 2009 during a joint concert appearance. They understood each other musically right away. The two have since collaborated often in projects of duos to larger ensembles. They recorded their first CD with the quartet (Rays Of Light) which was released in March 2013. In 2015 they recorded a new album consisting mainly of tunes of the pianist Horace Silver. This album will be released soon.

Listen to music of this quartet:

A video clip with a performance of this quartet can be seen here:

Concert reviews of the quartet: 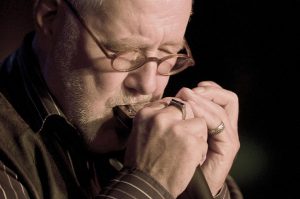 Born in Vlissingen/NL is self-taught on the harmonica. Jan played in the 70s with big bands like Skymasters and Metropole Orchestra. Has done a lot of studio work. Recorded many CDs, also as a leader (most recent recording is "Standards and other pieces' with Bert van den Brink and Fay Claassen). Has performed with, among others Hod O'Brien, Bill Goodwin, Bert vd Brink, Fay Claassen, Hein vd Geijn, John English, played at the North Sea Jazz Festival, toured USA (1990/1), Canada, Denmark, Germany and Belgium. 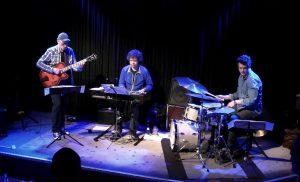 The sound of a Hammond B3 organ can't be described in words, it has to be experienced live. This trio respects the heritage of past organ-trios (Jimmy Smith, Jack McDuff, Larry Young etc.) but refines itself constantly in search of individualism and meaning. In this framework the creative process is of great importance in soloing or interplay.

As a virtuoso soloist with 25+ years of experience Christian can express himself uninhibited employing single lines or chords. The seasoned organist Clemens Orth utilizes the possibilities of the organ to the max by using keys and foot-pedals effectively. The picture gets rounded out by drummer Silvio Morger. Naturally not only a accompanist with big ears but a equal partner communicating on par with the rest of the group. In addition to originals, the trio plays modern Jazz based on the standard latin and swing repertoire.

A video clip with a performance of the organ trio can be seen here:

Concert reviews of the organ trio: 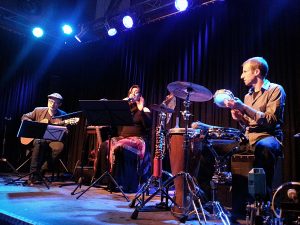 The trio will take you on a trip into the fascinating soundscapes of Brazilian music. The Brazilian Denise Krammer sings authentic Bossa Nova and plays guitar as well. She will surprise you with her charming voice and secure phrasing. She will be accompanied by experienced guitarist Christian Hassenstein. Inspired by the music, he conveys the richness and the beauty of the Bossa Nova. Rhythmic accents and support will be provided by percussionist Maxim Zettel--who also a resourceful improviser--utilizing Brazilian percussion instruments from Agogo to Xaxixi.
The interplay of this trio will inspire and move audiences alike! 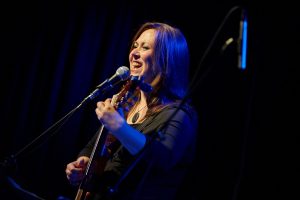 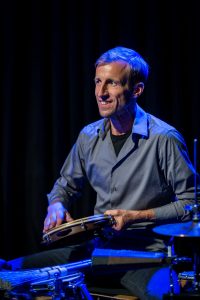 The combination of guitar and vibraphone has something magical about it. A sound that is especially memorable in its richness and lyricism. Not for nothing were jazz bands in this line-up popular, think of combinations of Red Norvo with Tal Farlow, Gary Burton with Pat Metheny or Milt Jackson with Wes Montgomery.

The band members of the Hassenstein-Lorenz Quartet feel connected to this tradition and develop their own sound language from it. Their own pieces are combined with jazz standards for which special arrangements are specially tailored.

Here is a current video with excerpts of a performance of the band:

Concert reviews of the quartet: